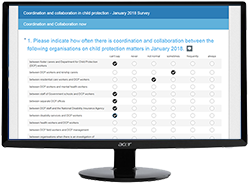 The results from the Collaboration and Cooperation Survey completed last week show little change in the rate of collaboration and cooperation between foster carers and the Department for Child Protection, with percentages in each category being similar to those in June 2017.  Responses from those identifying as foster carers varied significantly from the overall result but the number of foster carers who responded is small.

*n is the number of respondents who felt competent to comment on this aspect of collaboration and cooperation. Where the numbers are small, one should be careful of drawing more than broad general conclusions.

Five of the foster carers who responded left comments.  Some comments have been edited for brevity and to minimise repetition.

Cooperation and collaboration between Foster Carers, Kinship Carers and the Department remains sub-standard… Examples of this are an absence of communicating with carers about a child’s access to biological parents which is only known after the access has occurred or material decisions being made with no regard to the best interests of the child.

Carers are being excluded from children’s annual reviews including meetings, copies of their own annual reviews, case planning [and] financial agreements…  Meetings are taking place without carers … decisions are being made by staff, both NGO and DCP, who have never met the children nor the carer and with no knowledge at all…

Comments from other than foster carers

Communication between DCP and Carers (foster and kinship carers caring for children in the statutory care system) can be improved. Many issues that arise for carers are due to lack of communication, miscommunication or poor communication. (NGO Manager)

DCP workers do not have the attitude and skills to work respectfully and collaboratively with families and other professionals….The message about respect and collaboration is not breaking through. (child protection worker – area not identified)

I think communication can be excellent and it can be really poor. I believe it is person-led and not necessarily because any organisation applies quality assurance measures across the agency consistently. (DCP worker)

I’ve not noticed any significant change as recommended by the Royal Commission, in particular foster carers are provided with next to no information on the children residing in their homes. (DCP Worker)

Although the number of respondents was fewer than in the 2017 survey, the responses indicate that there has been little change in the frequency of coordination and collaboration between foster carers and the DCP.  The comments left by foster carers highlight similar issues to those raised in the June 2017 survey and are supported by respondents elsewhere within the system.

It is reasonable to expect that cooperation and collaboration should occur ‘always’ or ‘frequently’. Only 25 percent of respondents to the June 2017 survey and 22 percent of the 2018 survey gave a ‘pass mark’ to the DCP/foster carer collaboration by this standard.  The bulk of the commentators suggested or implied that the DCP should take the initiative in improving the collaborative relationship. Numbers of commentators suggested that workload for DCP workers limited opportunities to develop collaborative practice.