What’s been done – September to November 2010

The Office has joined the consultation on the 2010 update of South Australia’s Strategic Plan to propose this target specific to children in care:

Exceed the Australian average for wellbeing of children and young people in out of home care, as indicated by educational achievement, stability and successful transition to adulthood.

We are also supporting new targets for healthy child development and prevention of abuse and neglect of children.  Team members have attended consultation workshops, participated in online conversations and prepared a submission, Making our state a better parent.

A discussion paper on improving the mental health of children under guardianship was released for consultation on 16 September. Work on this will continue in November.

The Guardian’s Office has released A Community Visitor Program for Children in State Care report on the feasibility of introducing such a program in South Australia. The report includes background research on other community visitor programs, the outcomes from a discussion with South Australian experts and consultation with the Guardian’s Youth Advisors.

In the period August to October staff from the Office audited 57 annual reviews and conducted 21 monitoring visits.

A report on the Office’s audit of annual reviews of children and young people in care has been compiled and provided to the Minister following opportunity for comment from Families SA.  A Summary of the 2009-10 Audit of Annual Reviews is available in PDF.

With the South Australian Council of Social Service (SACOSS), the Office continued a series of information sessions for the NGO sector about the Information Sharing Guidelines (ISG) and is receiving positive feedback about the booklet A Guide to Writing an ISG Appendix. We have been working with Anglicare and Community Centres SA, formerly CANH, to promote the ISG.

The selection process for committee members for the Youth Advisory Committee (see the article on page 6) was held in August and September and the first meeting was held on 1 October.

The independent Report on the Review of Performance and Effectiveness of the Office that was commissioned in April has been delivered.  As well as the evaluation, the report contains suggestions about needs and priorities gleaned from a wide range of stakeholders which will  be included in forthcoming strategic planning. 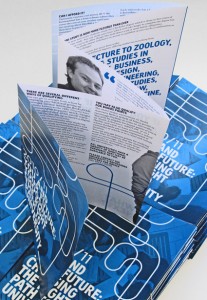 The brochure You and your future: choosing the right path to university has been updated and reissued for 2010-11 with the assistance of the three South Australian universities.  Distribution has started with the help of Families SA offices, the Department of Education and Children’s Services, the universities and YACSA.  Copies of the brochure can be ordered from the materials page of our website and can also be viewed  in a PDF version.

The Office responded to the Department for Families and Communities’ consultation on directions in alternative care which closed on 3 September.  The Response to Directions for alternative care is available in PDF on the Guardian’s website.