Rights may be the key to improving youth detention 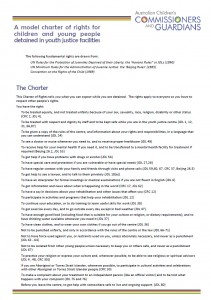 In July, the Australian Children’s Commissioners and Guardians (ACCG) released a Model Charter of Rights for Children and Young People Detained in Youth Justice Facilities. The model charter is based on international agreements to which Australia is a signatory, and provides children and young people in custody with an easy to understand guide to their rights, and what they are entitled to while in custody.

‘Here, in one document we have some of the key rights that apply to young people in detention’, said Mr Bernie Geary, OAM, Principal Children’s Commissioner in Victoria and the national convenor of ACCG.

‘They may seem basic to most of us, like being treated with dignity and practising your religion, or not being unfairly punished, but most children and young people who are locked up don’t know what they are entitled to, or what to do if they have been treated unfairly.

‘Each of the Commissioners and Guardians will use the charter within their own jurisdiction, but will adapt how the information is conveyed in plain language to young people in custody depending on the individual circumstances in their State or Territory’, Mr Geary said.

Mr Alasdair Roy, ACT Children and Young People Commissioner said that the ACCG hoped that the Charter would assist to highlight the importance of rights in any discussion about youth justice.

‘Many people think that human rights are only relevant to people living overseas, or are simply an abstract concept in international law, but they are not. Human rights are relevant to everyone in Australia, including children and young people in custody, and they are a very useful yardstick by which we can measure the quality of service delivery for children and young people’, said Mr Roy.

‘I was pleased to hear that the ACT Government has announced that it intends to undertake an audit of the Bimberi Youth Justice Centre, using the model charter as a guide, and that they will also be holding discussions with Bimberi residents about how the Charter can best be promoted within the Centre’, said Mr Roy.

A copy of the model charter has been provided by the ACCG to youth justice administrators in each State and Territory.

‘We hope that each State and Territory will see the benefits of a rights based approach, and will use the charter to monitor and guide service improvement within their own jurisdiction’, said Mr Roy.