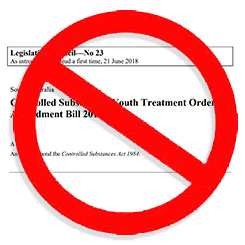 We know that substance misuse can have terrible consequences for children and young people.  Their developing brains can be seriously harmed by the use of legally available substances like alcohol and solvents, as well as cannabis and a growing array of other drugs.

Substance abuse can lead to reduced intellectual capacity, permanent behaviour changes and long-term, debilitating mental health problems. It can also exacerbate or be associated with other dangers, risky behaviour, criminal associations and vulnerability to exploitation.

My office and I give credit to the Government for acknowledging and trying to address this difficult issue, with the introduction of the Controlled Substances (Youth Treatment Orders) Amendment Bill into Parliament last year. However, in providing for the detention of young people for up to 12 months for compulsory treatment, the Bill raises many serious concerns.

Our community is rightly cautious about depriving anyone of liberty who has not been convicted of committing an offence.  Our legal system and international treaties to which we are a signatory protect the right of people, including young people, to their freedom.  We deprive people of their liberty only under exceptional, very specific circumstances and with the assumption that their rights will be protected in relevant legal processes.

There is a danger when the legal deprivation of liberty might be misused by a community to dispose of people who are inconvenient. So, as a community we must be wary about any solution that creates a ‘too hard basket’ into which inconvenient and hard to deal with young people can be relegated.

These concerns are backed up in a submission from the Castan Centre for Human Rights Law at Monash University, which was released in February. It argues that the Bill poses a significant risk to a number of human rights and also reiterates that detention should only be used as a last resort and for the shortest period of time.

Will this ‘solution’ work?

The second question about the proposed treatment orders is their efficacy.  The Bill was introduced with scant consultation with the many government and non-government agencies that have long     involvement and experience with young people affected by substance misuse.  It also seems to have been drafted with little regard for the experience of other similar jurisdictions in Australia and overseas and for the considerable body of research that points to the complexity of the problem but also provides some valuable ways forward.

A significant number of the young people who come into state care become involved in substance misuse.  The range of circumstances—physical, emotional and sexual abuse, and neglect—that bring them into state care also leave many deeply affected by trauma.  Self-medicating with legal and illegal substances can become for them a viable way to cope with the pain of that trauma in the absence of other treatments.  For others, deprived of secure family and community attachments, the community of drug users can provide a much-needed family and identity not provided elsewhere.

Young people in care and detention

This particular group of young people is well known to those of us at the Office of the Guardian.  They do not define the extent of the problem but do give an indication of the complex reasons why young people turn to substance abuse. Our experience shows the diversity and complexity of the solutions we need to offer if we are going to be effective.  There is already a serious shortfall in the provision of drug rehabilitation services for young people who actually want them. Government responses that assume ready access to non-existent services or new programs that are not properly planned and resourced, are doomed to fail.

If there is a case for the involuntary detention of some drug-affected young people for short periods, that evidence must be mustered. But informed opinion agrees that effective rehabilitation will be achieved only by long-term, evidence-based programs that address the individual causes and in conjunction with the family and community that surrounds them. Treatment needs to be health focussed, rather than treated as a legal issue.

The Youth Treatment Orders Bill, which is again due for debate in the Legislative Council this week, should be withdrawn in its current form. Let us make use of the knowledge and experience in our community, alongside the considerable body of research to craft a response, and voluntary services, that offer genuine hope of assisting children and young people with a substance abuse problem, while still safeguarding their freedom.