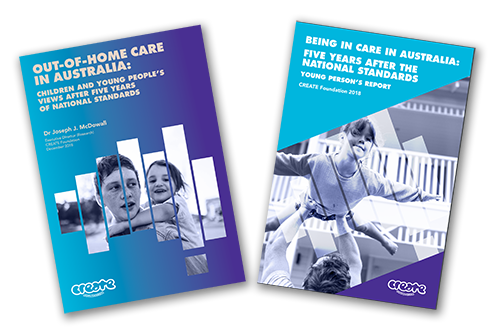 For its latest report, the CREATE Foundation surveyed 1,275 young people around Australia with care experience, covering topics including health, education and connection to culture.

Out-of-Home Care in Australia: Children and Young People’s Views After 5 Years of National Standards reports that 93 per cent of young people felt safe and secure in their placement and 96 per cent had a meaningful connection with a family member that they expect to maintain. It also found 93 per cent had regular health checks.

Among the positive views from young people, the report also raises their concerns, some of which we examine below with a particular focus on the situation of young people in care in South Australia..

Of the respondents with siblings, 36 per cent were separated from all their brothers and sisters. South Australia had the highest proportion of split placements with 53 per cent.

Sibling contact was high in this state, which the report suggests could reflect the higher number of split placements. The report recommends South Australia adopt a program like Victoria’s Keeping Connected program announced last year.

Aboriginal and Torres Strait Islander young people continue to be over-represented in out of home care. About one third of Indigenous respondents of the CREATE survey felt strongly connected to their culture while one third reported little connection.

From the age of 15 it is expected that young people will start planning and preparing to transition from care. A plan to assist them in this process is created in collaboration with the young person’s caseworker and carer and covers things like housing, education, life skills and employment.

Almost one quarter of respondents 15 years old were aware of having a transition plan which increased to just 40 per cent for 17 and 18 year olds. Awareness varied across the states with South Australia having the lowest awareness at 18 per cent while Western Australia had the highest with 65 per cent.

The report found young people who were involved in developing their plans tended find them more useful.

The survey found that around two thirds of young people across Australia were not aware of the existence of The Charter of Rights for Children and Young People in Care in their state or the rights it described. This response was consistent across the states and territories. The report suggests that to be effective, statements of the rights must be properly implemented not be tokenistic.