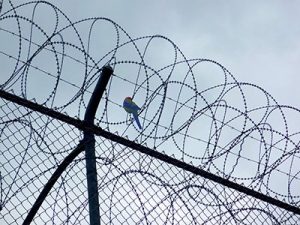 Recently it came to light that the Northern Territory police have continued to use spit hoods and mechanical restraint chairs on children and young people as young as 12, despite recommendations of the 2017 Royal Commission into the Protection and Detention of Children in the Northern Territory to ban their use. The image of a young man, hooded and restrained to a chair, was one of the factors that led to the Royal Commission.

The use of spit hoods has the potential to be fatal, and there have been numerous cases of deaths in custody where spit hoods, or similar devices, have been used.

Many national expert groups have now called on the NT government to pass legislation to prohibit the use of these devices on children, including the Australian and New Zealand Children’s Commissioners and Guardians (ANZCCG), an organization which includes SA’s Guardian/Training Centre Visitor.

In a joint, open letter to the NT government ANZCCG expressed grave concern that these restraint practices are continuing on children and young people, despite the overwhelming evidence of the harm they cause. But the letter also points out that, ‘to date South Australia is the only jurisdiction within the remit of ANZCCG that has legally banned the use of spit hoods.’

Spit hoods have not been used in South Australia’s youth detention facility since a powerful Ombudsman’s report in 2019. However, it was not until 2021 that their use (on both children and adults) was banned in legislation introduced by SA Best’s Connie Bonaros after a campaign by the family of Wayne Fella, an adult prisoner who died while hooded, in 2017.

The ANZCCG’s letter also calls for State and Territory laws to be consistent with the aim of the Optional Protocol to the Convention Against Torture (OPCAT), to which Australia is a signatory, and which is yet to come into effect despite Australia’s commitment to enact this by January of this year. (Regular readers of our blog will know that we’ve taken a keen interest in OPCAT.)

The ANZCCG group recognises that the children and young people who come to the attention of our justice systems are often some of the most vulnerable and disadvantaged members of our society, and that a disproportionate number of this cohort are Aboriginal and Torres Strait Islander.

On an average day In SA’s Kurlana Tapa Youth Justice Centre, Aboriginal children and young people make up 55.3% of all residents in the centre.

While it is crucial to prohibit damaging practices like using spit hoods and mechanical restraint chairs on children, it begs the question why children are still being locked up in these institutions at all.

But alarmingly, in South Australia, the minimum age of criminal responsibility still sits at 10 years old – an age when a child is in year 5 at school and still losing their baby teeth.

Despite the national Council of Attorneys-General handing back the decision to raise the minimum age of criminal responsibility to individual states last year, SA is yet to commit to any significant change to this situation, such as raising the age to 14 as recommended by the United Nations.

In OGCYP we consider it to be a matter of shame that the vast majority of the very young detainees who frequent the justice centre have disabilities, are in care, and are Aboriginal.

This begs another question that we should all be asking:  when it comes to a 10 or 12 year old who has already faced more challenges and trauma than many of us will ever see, at what point does the argument that they should take personal responsibility for their actions become nonsensical? How can a child – who may well have disabilities associated with trauma and disadvantage –  take responsibility for the life they have been born into?

On one hand we see that SA has made some really positive changes for the children and young people in youth detention. For example, we no longer use spit hoods and have ended routine semi-naked searches. On the other hand, we still lock them up and fail to provide them with the programs, supports and services that are adequate for their complex needs.

If we really want things to change for these young people and their families, not just in SA but around the nation, we need to work to keep them out of detention. We could start by  raising the age of criminal responsibility and by investing much more in culturally safe family support and early intervention.