Australia reports to the UN on child rights 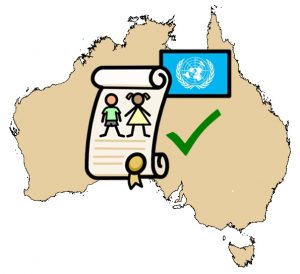 The United Nations Convention on the Rights of the Child is one of the most important documents in preserving the rights of children around the world.

The Australian Government is currently preparing for its meeting with the Committee, following the release of its report in January 2018.

In this post, we look at two accompanying reports responding to Australia’s report to the UN Committee on the Rights of the Child.

The Australian Child Rights Taskforce is a peak body made up of more than 100 organisations advocating for the rights of Australian children. Convened by UNICEF Australia, the taskforce released its ‘alternative’ report, which includes the voices of 572 children and young people consulted in 30 locations around the country. It makes 191 recommendations to promote and protect the rights of children in Australia.

Similarly, the Australian Human Rights Commission (AHRC), an independent statutory organisation promoting and protecting human rights in Australia, released a report. It was written following consultations with approximately 450 children and a further 22,700 through an online national poll on child rights.

While the Government’s report is no longer available online, these two reports look exhaustively at matters relating to children in Australia. We are considering some of the areas relating specifically to children and young people in out-of-home care.

Since Australia last reported to the Committee, there have been 24 separate inquiries, which have each identified issues with the child protection sector. The AHRC report finds the number of children and young people in out-of-home care has increased by 18 per cent in the past five years. The alternative report identifies problems with inconsistency and a lack of emphasis on frameworks being child centred.

However, this does not yet include the 11 per cent of children and young people in residential and emergency care. Both reports recommend the Australian Government increase, or consider increasing, the age children leave care and call on governments to implement policy to prepare young people transitioning to independence.

The alternative report makes a number of recommendations in this area, including the implementation of nationally consistent standards to respect all five elements of the Aboriginal and Torres Strait Islander Placement Principle. It also calls on the Australian Government to commit to ‘Closing the Gap’ targets to reduce the rate of Aboriginal and Torres Strait Islander children in out-of-home care.

The UN Committee will consider the findings of these reports ahead of the formal meeting with Australia. At the end of this process, the UN Committee will provide the Australian Government with its Concluding Observations, which will include progress made by Australia and recommendations for improvement.

While the Committee cannot legally enforce its recommendations, it can provide guidance for the Australian Government to improve its practice and better protect the rights of children and young people. The process is also the opportunity to highlight specific issues, like those discussed above, and create interest for the public and other advocates to hold the Australian Government to account and to take action.