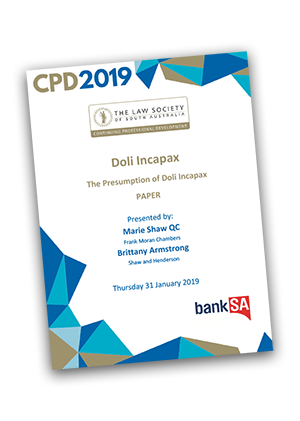 The minimum age of criminal responsibility in South Australia is 10 years old. If you are a child under 10 years old in South Australia, you are deemed to be incapable of committing a crime – you are presumed not intellectually and morally developed enough to conceive of the difference between right and wrong.  If you are between 10 and 14 and are charged with an offence, it is up to the prosecution to prove that, at the time of the offence, you understood what you did was seriously wrong, and not just naughty.  If they can’t prove that, you are presumed to be doli incapax (from the Latin ‘incapable of evil’).

Such an obligation on the prosecution is designed to result in a graduated response across an age range where the court can take into account the considerable variation in intellectual and emotional maturity in the young people who appear before it.

Barrister Marie Shaw QC and lawyer Brittany Armstrong presented a paper on doli incapax at the Law Society in January. This was motivated by their experiences representing 10 to 14 year olds in the Youth Court and, in many cases, the protection of doli incapax was not being properly utilised. As young people in care, and particularly those in residential care, are so over-represented in our youth justice system, this particularly affects them.

In a number of cases known to advocates within the Guardian and Training Centre Visitor’s office, doli incapax was not presumed, and in at least one instance the defence was put to the task of proving doli incapax.

If this is to be a safeguard for children charged with criminal offences then it should be considered from the time of police interview, to bail applications, and if a 10 to 14 year-old comes before a court.  It is currently not. The reasons it is not are not entirely clear but could include a lack of knowledge by the child or their advocates of this presumption, the strong desire to ‘plead out’ by a child or their advocate in order to resolve the matter more quickly, or other interactions between the child protection and youth justice systems not yet understood.

By no means is this presumption of doli incapax a ‘get out of jail free card’. Each time a child or young person comes before the youth justice system, they are less likely to be presumed doli incapax.

The implications for children

Research shows that the younger a child is when they come into contact with the justice system, the more likely they are to have sustained contact.

The developmental maturity of children in this age group also means they are often insufficiently capable of engaging in youth justice processes. Children may be more likely to accept a plea offer, give false confessions or not keep up with court proceedings.

Keeping younger people out of the youth justice system would also mitigate the over representation of Aboriginal and Torres Strait islander children in youth justice.

Australia’s age of criminal responsibility is comparatively low compared with other countries around the world. The United Nations has proclaimed that the absolute minimum age should be 12 years old with that recommendation likely to increase to 14. The UN has called on Australia to raise the age of criminal responsibility, bringing it in line with its obligations under the Convention of the Rights of the Child.

In line with the Convention on the Rights of the Child, Canada raised the minimum age from 10 to 12 years, but also removed the presumption of doli incapax. This leaves children aged 12 and 13 vulnerable.

Similarly, Ireland raised the minimum aged from 10 to 12 years old, but it has also maintained the doctrine of doli incapax.

While many have argued that the age of criminal responsibility should be raised to at least 12, children aged 13 to 14 should still be protected by the principles of doli incapax.