Universities reach out to young people in care 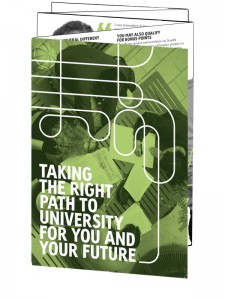 South Australia’s three universities have combined with DFEEST and the Office of the Guardian to design a brochure to encourage young people under, or recently under, guardianship to actively consider university study.

‘Following the Bradley Review into Higher Education, government policy is encouraging further effort into attracting and retaining students from diverse backgrounds and this brochure is an important first step in reaching young people in care.’

The brochure describes a range of options for uni entry, ways of funding study, the variety of courses available as well as telling some real-life stories of young people under guardianship who have made the journey to university.

While targeted to young people in their later years at high school, it also aims to influence the attitudes of adults who might support and encourage them.

‘We know that the positive attitudes and active support of foster carers, teachers, school counsellors, social workers and other adults are vital in promoting the educational success of young people in care,’  says Guardian Pam Simmons.

‘Getting the right information into the hands of these significant adults will be an important use of the brochure.’

Contributor to the booklet, Jessica Parker, recalls her route to qualifying for university.

‘Nobody from my immediate family had continued onto further study or considered getting a degree at university… The majority of my friends left about year 10 and only then I became serious about my future.  Support from my Aboriginal Support Worker was great and kept me focussed on success,’ she said.

‘Some people in care will come to uni directly from school but there other routes.  Options after they have left school and even into their adult lives include TAFE, adult re-entry colleges, foundation studies at one of the unis or the Special Tertiary Admission Test,’ says Deb Tranter.

‘Many young people may not know that they are eligible for bonus points to help them qualify if they are on Youth Allowance, ABSTUDY or a Health Care Card, have studied certain subjects or come from some under-represented schools.’

The brochure is distributed to DECS school counsellors, through universities and can be downloaded as a PDF from the Guardian’s website (big file, might take a while!).