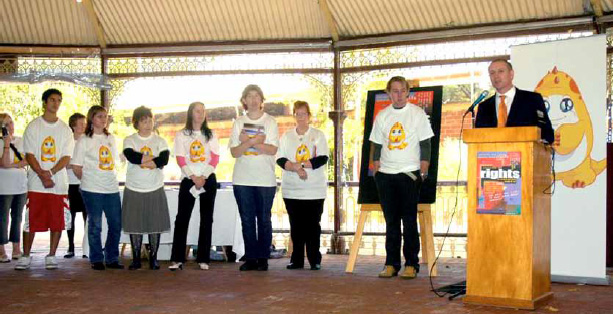 Lions roared, parrots squawked, monkeys howled and the first Charter of Rights for Children and Young People in Care in Australia was launched.

In a lunchtime ceremony in the Rotunda of the Adelaide Zoo on April 19, young people involved in the development of the Charter explained why they felt that a clear statement of rights for children and young people in care was important.

Reflecting on her time in guardianship, 19 year old Rachel Hopkins said, “Most kids don’t know what to expect when they go into care.

“They want to know why them and what is going to happen next. The Charter will help clear up a lot of those things and make sure they know it’s alright for them to ask questions.”

Eighteen year old David Wilkins who chaired the event said, “Children in care want to feel like any other children – they want to have the same opportunities and support.”

“It’s really important for children in care to know they have rights. For those coming in to the system, this Charter will be able to provide them with information to help them deal with being placed under guardianship.”

Surviving a simian heckling that he said rivalled even that of his parliamentary colleagues, Minister for Families and Communities, Jay Weatherill congratulated the children and young people, carers and the many professionals whose work created the Charter.

“Children and young people are placed under guardianship when they are unable to remain in their family home making them among the most vulnerable,” he said.“They need to know they can expect to be treated well and cared for properly while they are under guardianship. It also is crucial for them to know they have options if something goes wrong. The Charter is a great way of telling them this and preventing problems such as abuse.

“We are going to ask people and organisations providing care to endorse the Charter and build it into their ways of working with children and young people including their performance standards and reporting process,” he said as he officially launched the Charter.

The launch was attended by more than 100 children and young people and about the same number of carers and other interested adults. After the launch they joined the Office of the Guardian staff for a hotdog and gourmet sausage sizzle and were entertained by young DJ Ben and Dr Blot the clown before spending a sunny afternoon at the Zoo.

The Charter and the value of formalising rights for children and young people in care will be promoted strongly over the next few months.

To read the Charter and to view the promotional materials, visit the Charter of Rights page or contact the Office of the Guardian for Children and Young People on 8226 8570, email gcyp@gcyp.sa.gov.au