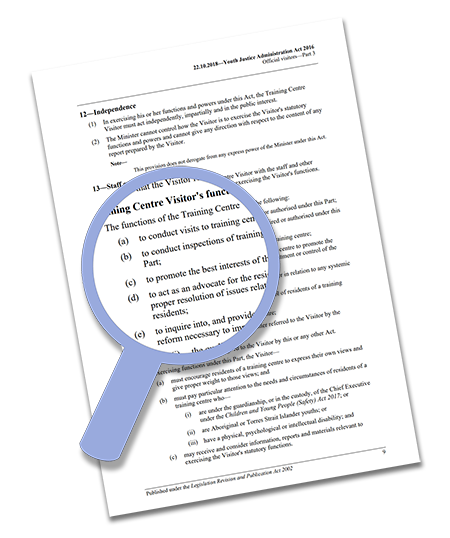 Events at Darwin’s Don Dale Youth Detention Centre in 2016 alarmed the community and shone a spotlight on the unsuitable treatment and environment in youth detention centres across the country.

Riots, like those seen at Don Dale and other detention centres, demonstrated how complaints and concerns among residents could fester unaddressed and escalate without appropriate and timely intervention. It is essential that the wellbeing of residents and staff in institutions closed to public view is assessed and monitored to ensure young people in juvenile detention, who are some of our most vulnerable, are protected.

Improving and strengthening the way places of detention are monitored is one way to prevent mistreatment. In jurisdictions across Australia there are processes in place to investigate and review detention facilities.

In South Australia, the Training Centre Visitor Unit (TCVU) conducts visits to both campuses of the Adelaide Youth Training Centre (AYTC). Legislated in the Youth Justice Administration Act 2016, the Training Centre Visitor protects and promotes the rights and best interests of young people on remand or sentenced at the AYTC. This allows the visitor ‘to act as an advocate for the residents of a training centre to promote the proper resolution of issues relating to the care, treatment or control of the residents.’

The ability to make a complaint to an independent person, like an official visitor, is also one of the rights in the Charter of Rights for Youths Detained in Detention Centres.

In March, the TCVU released a report about its pilot visiting program and review of records. During the pilot, residents raised issue with the frequency of unclothed searches. By identifying these kinds of resident concerns and raising them with AYTC management and the Minister, external visitors can draw attention to degrading procedures as well as potentially preventing the issue from escalating. Readers may have seen a recent article in the Advertiser in which Penny Wright, the Training Centre Visitor, made it clear that she did not support the continuation of excessive and intrusive strip searching and methods such as ‘squat and cough’.

This preventative approach will be further refined following Australia’s ratification of the Optional Protocol to the Convention Against Torture (OPCAT). OPCAT is an international agreement that’s main aim is to prevent the mistreatment of people in detention.

Australia has three years in which to fulfil its obligations and develop an independent National Preventative Mechanism (NPM) to comply with its obligation under OPCAT. The NPM conducts inspections of all closed spaces and places of detention. Australia joins 88 other countries as a party to OPCAT, 71 of which have designated their NPM.

The Australian Human Rights Commission has been conducting consultations on how Australia should implement OPCAT.  The Commonwealth Ombudsman is also coordinating an assessment about how a ‘diffuse’ NPM model might operate across State and Territory jurisdictions.  At the moment it is unclear what Australia’s NPM will look like and what the involvement of existing monitoring bodies will be.

The TCVU will conduct its first formal inspection of the AYTC in the final quarter of this year. It will be informed by the work and information gained during the program of visits and reviews of records that have been implemented since mid-2018. This inspection process is being developed so it will be compliant with OPCAT requirements.

Around the world, jurisdictions similar to Australia are having success with models of juvenile rehabilitation that are radically different to those here. Much stronger independent oversight and monitoring will increase transparency and identify problems before they intensify. Success can also be measured by the way these programs challenge and force reconsideration of the largely penal model that dominates Australia’s thinking.

PrevPreviousA new focus on family
NextThe Guardian’s Newsletter – May 2019Next