The United Nations Convention on the Rights of the Child 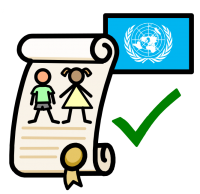 The United Nations Universal Declaration of Human Rights is 70 in 2018 and of it’s many grandchildren, the most widely ratified is the United Nations Convention on the Rights of the Child (CRC). To mark the anniversary, this is the second in the series of short articles about understanding, promoting and safeguarding rights, particularly those of children growing up in care or detained in youth justice facilities.

Before the Convention on the Rights of the Child

The date of its adoption, 20 November, has been adopted as Universal Children’s Day.

These earlier Declarations, and the Universal Declaration of Human Rights, are acknowledged in the preamble to the CRC.

Like the Universal Declaration of Human Rights, the CRC is a global document that has been translated into over 500 languages and several child-friendly versions.  Nearly 200 countries are now party to the treaty, including every UN member except the United States.  The US contributed significantly to the drafting of the CRC and signed it in 1995 but successive administrations, including those of Presidents Clinton and Obama, have failed to pass the necessary legislation to ratify it.

The CRC took 10 years to draft.  It sets out the civil, political, economic, social, health and cultural rights of children.  It defines a child as any human being under the age of eighteen, unless the age of majority is otherwise defined locally.  It was adopted by the United Nations in 1989.  It entered into force in 1990 when it had been ratified by a required number of UN member states which had passed enabling legislation.

In the succeeding years, three Optional Protocols (OP) have been added to the CRC to address particular issues affecting children. These are treaties in their own rights that provide for procedures with regard to the treaty or address a substantive area related to the treaty

The OP on the involvement of children in armed conflict, sometimes known as the ‘child soldier’ treaty came into force 2002 at the same time as the OP on the sale of children, child prostitution and child pornography.

The OP on a communication procedure, which came into force in 2014, sets out an international complaints procedure for child rights violations, which enables children and their representatives to bring complaints about violations of their rights to the UN Committee on the Rights of the Child if they have not been fully addressed in national courts.

The UN has also produced other documents to enhance the implementation of the CRC by member states.  Two examples that are especially relevant to child protection and juvenile detention are the 1985 Standard Minimum Rules for the Administration of Juvenile Justice (known as the Beijing Rules) and the Guidelines for the Alternative Care of Children.

Most UN documents tend to be discouragingly dry and text-heavy but we have a liking for the colourful material produced by the Scottish Children’s Commissioner, especially this poster of the UN Convention on the Rights of the Child.