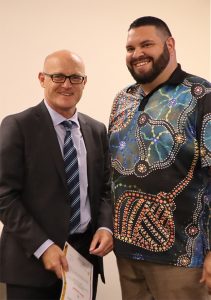 Last week our office celebrated the work of two young people who shared their experiences across the courts, child protection and youth justice systems to better educate Judges and Magistrates when dealing with Aboriginal people who appear before the courts.

The video, featuring the young people who were previously detained in the Adelaide Youth Training Centre, is part of a bigger project from the Courts Administration Authority (led by Martin Hinton, Director Public Prosecution, formerly Justice Hinton) to improve existing cultural awareness training for Judges and Magistrates. This video aims to provide an insight into what life is like for these young Aboriginal people and the role the courts can play in ensuring their voices are heard.

While only one young person was able to attend our celebration, we wanted to acknowledge both of the amazing young people who were willing to share their stories for this project and tell the courts what they wanted to see changed.

Training Centre Advocate, Travis Thomas, and Advocate, Aboriginal Children, Conrad Morris, supported the young people in the lead-up to and throughout the project.

Conrad noted the planning and workshop that was held prior to the filming was essential in providing the young people with a safe space where they were confident to share their voice. The footage of the two young people was shot in just one take which is a mighty impressive effort!

At our afternoon tea celebration, Martin said he was impressed by all the work Conrad and Travis had done to help pull this video together. He also said how proud he was of the two young people, and how brave they were in sharing their stories.

“If the young people don’t stand up for themselves, then we [Judges and Magistrates] can’t get better,” Martin said.

“That’s the reason I did it [to change the mindset of the courts],” the young person said. The young person called for Judges to ‘listen to what we have to say’ and ‘give us more opportunity to do the right thing’.

The young person also told us that since the making of the video ‘the judge actually talked to me’ when they were last in court.

For privacy reasons, we are unable to share the video but we expect and hope the flow-on effects of the project will be evident when the voices of young people are more vigorously sought and heard during court processes.