Children’s rights are at the forefront in 2015 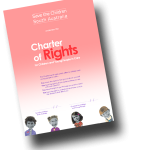 Over 65 agencies have endorsed the Charter of Rights for Children and Young People in Care and over 200 Charter Champions have committed to promote children’s rights within those agencies. With the world celebrating the 25th anniversary of the UN Convention on the Rights of the Child and the SA Charter of Rights due for review this year, it is a good time to look again at the significance of articulating rights for children.

In 2005 Guardian Pam Simmons initiated and oversaw the development of the Charter, together with a reference group of young people who endorsed the final version.

‘It was obvious from day one in this job that children and young people in care, and their advocates, needed to know what was fair to expect. The international convention was a great place to start but it needed to be spelt out for the experiences that children in care commonly have.

‘The Charter comes alive when people use it to persuade others to do the right thing by a child. Best of all, are the conversations that happen about the rights because it reminds or teaches us about our responsibilities to others. The world becomes a kinder place.

‘It was great fun creating the Charter, which had us working with the good folk in the Create Foundation and two other facilitators in consulting with children. It was the only event that year at which I got to take my shoes off and sit on the floor.

The Guardian is required by law to review the Charter this year.

‘I don’t expect there will be big changes to the words of the Charter but there may be a difference in emphasis and promotion. First off, we will be returning to groups of children to seek their views and then discussing these with the adults who are responsible for meeting those rights.’

The Convention on the Rights of the Child was adopted by the United Nations General Assembly in 1989 and was ratified by Australia in December 1990. It has not yet been incorporated into Australian law but Australia’s government has committed to make sure every child in Australia has every right under each of 54 Articles in the Convention.

Compliance with the Convention is monitored by the United Nations Committee on the Rights of the Child, which is based in Geneva. Governments which are party to the Convention must report every five years to the Committee highlighting what they are doing to ensure children’s rights are being met. The Australian Human Rights Commission and non-government organisations provide their own reports containing their views about progress and violations. The AHRC report was released in May 2012 and the Child Rights Taskforce report in June. Australia is due to report again in 2018.

Information about the Charter of Rights can be found on the Guardian’s website and products promoting those rights can be viewed on the materials ordering page.